Adopted by the Board of Aldermen, November 9, 2015


The Town Square should be a safe, welcoming, comfortable, public space that accommodates users of all ages, where friends and family can dine, shop, recreate and socialize through the day and evening. It should reflect the character, personality, culture and history of the community, while at the same time addressing the interests and concerns of the adjoining property owners. It needs to be a space that gives people a reason to come to it, along with a reason to stay and enjoy themselves.

Presentations to the Board of Aldermen - November 2, 2016

Confirmed by nearly one thousand survey responses, residents overwhelmingly support the Town Square concept developed through an exhaustive community planning process. The broad representation of the Town Square Task Force, with the localized input of the Neighborhood Representatives Subcommittee, contributed to the creation of a conceptual design that has widespread appeal and support.

The specific question was posed in our survey, "Assuming that the Town Square would have all or most of the features in the conceptual design, do you...strongly favor, somewhat oppose, or strongly oppose...the project?" An overwhelming number of residents supported the design with 82 percent either strongly or somewhat in favor. This figure encompassed every demographic surveyed -

With this strong affirmation, we charted a course for the next phase of the Town Square, which is located just east of Straub's and Mason Woods Village in the geographic center of our city. The Board of Aldermen voted to engage the professional services of Landmark Contracting Management, Inc. to prepare a Request for Qualifications (RFQ) and a Request for Proposal (RFP). Brad Hornburg, principal at Landmark, has experience that covers the spectrum, from the development of Universal Studios in Florida to the redevelopment of West County Center in Des Peres to a municipal fire house.

Two developers submitted qualifications to participate in the project: Brinkmann Constructors and the development team of The Opus Group and the Hallmark Investment Company, who are associated with Mason Woods Village, which is next door to the Town Square project. With Mr. Hornburg's assistance, the City will receive proposals for aldermanic consideration as early as October.

With continued progress, we will establish a real sense of arrival to Town and Country, affording residents and visitors a place to go and a reason to stay as early as 2018!

The City of Town & Country is soliciting development, design and construction qualification statements from Developers for the Town Square Project, near the corner of Mason Road and Clayton Road, in Town & Country. A full-service development firm, or a team that can provide architectural design, engineering, community consensus, cost estimating and construction for this project is desired.

The City intends to evaluate responding proposals to select no more than three (3) firms to be invited to make priced proposals for the development of this property. The City reserves the right to reject any proposals for any reason.

A major consideration is the overall cost of the development, which could be partially offset from the sale or lease of the two acres used by the restaurants.

In December 2014 the City of Town and Country purchased the Wirth Property just east of the intersection of Clayton and Mason. Resolution R21-2014 was passed to create a Town Square Task Force comprised of 10 residents along with a Neighborhood Representative Subcommittee composed of 11 representatives from the adjoining properties. A series of open meetings were held to discuss what development elements should and should not be included in the project. After a list of design elements were developed, four professional design firms were invited to submit conceptual plans based on the established criteria. At a joint meeting it was agreed that the conceptual plan submitted by M+H Architects, with a few revisions, created the best overall concept. At the October 12, 2015 Board of Aldermen meeting Alderman Mange and Anderson submitted a report with the final recommendations from the Town Square Task Force and Neighborhood Representative Subcommittee.

The following points should apply to the entire project:

Part of the Task Force's recommendation was to include a wet detention facility (lake) with a fountain at the low spot on the south boundary designed to over retain storm water in order to help reduce downstream storm water problems. To view the storm water analysis click here.

To submit comments regarding the Town Square please click here. 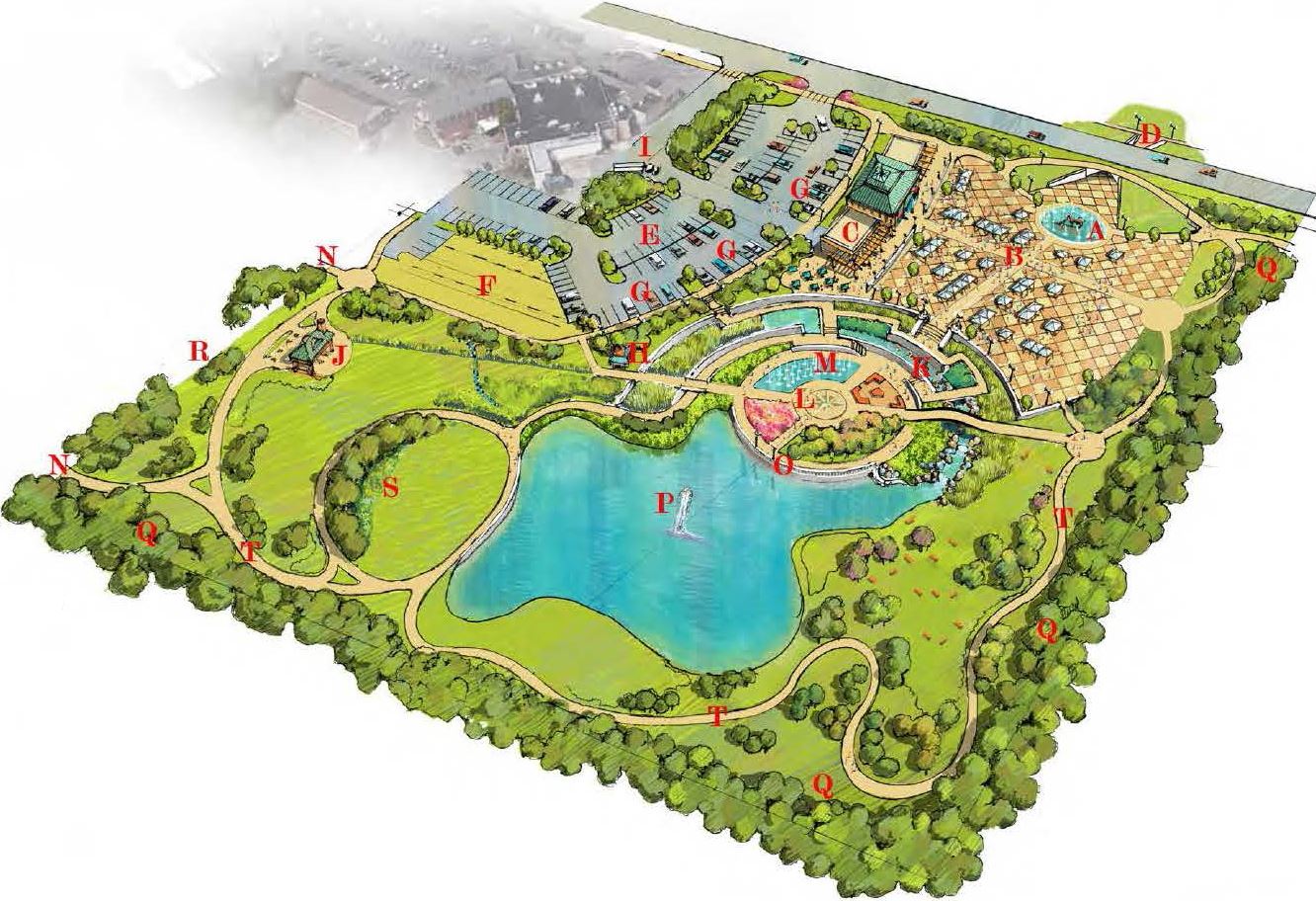